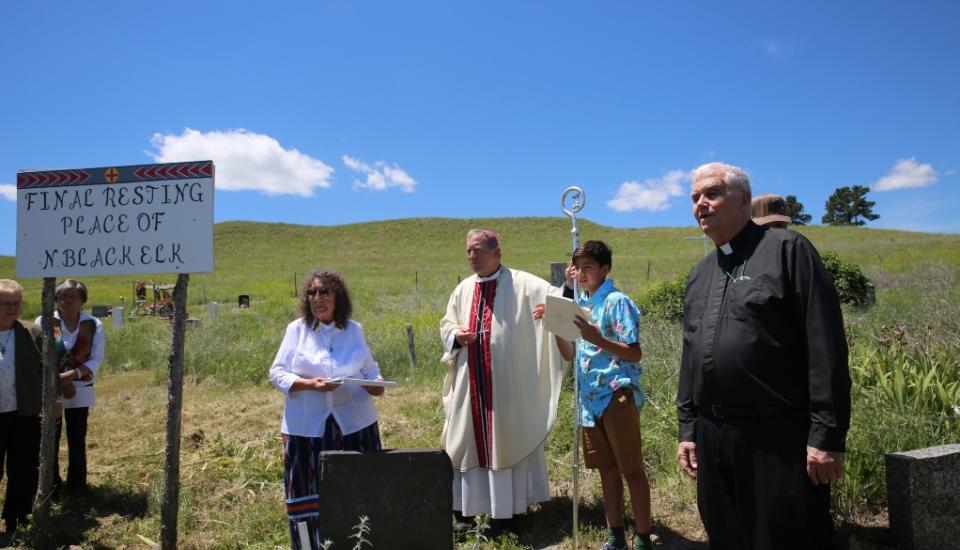 Teachers, students, clergy, and community and board members from Red Cloud Indian School celebrated Nicholas Black Elk’s nomination for canonization this past summer. On October 21, 2017, Nicholas Black Elk (1863-1950), the famous Oglala Lakota holy man, was nominated for canonization—the initial step toward sainthood in the Catholic Church. Since that day, the Diocese of Rapid City has been working closely with parishioners and community members on the Pine Ridge Reservation and beyond to document Black Elk’s life and spiritual work. He spent the second half of his life as a catechist, or religious teacher, traveling and sharing with thousands his beliefs in the parallels between Lakota and Catholic spirituality.

On Tuesday, June 25, at 11:00 AM, a Mass and community gathering was held at St. Agnes Church in Manderson, South Dakota, on the Pine Ridge Reservation—where Black Elk was a parishioner and where he is now buried—to celebrate the successful conclusion of the local phase of his canonization.

The former Bishop of Rapid City Robert Gruss celebrated the Mass, and the final documents describing what was found about Black Elk’s life and spiritual works during this process were signed. An official from Rome was present to take them to Rome for consideration by the Vatican Congregation of Saints, to determine whether Black Elk’s journey to sainthood will continue. Following the Mass, those gathered visited Black Elk’s grave.

During the Mass, Fr. Joseph Daoust, S.J., who serves on the board of directors of Red Cloud Indian School and as the Superior of Holy Rosary Mission Jesuit Community, shared how Black Elk created a bridge between Lakota and Catholic spirituality. “As a catechist, he prayed in both traditions. He prayed with a pipe and rosary every day,” Fr. Daoust said. “Some might think he was walking two roads. But he really blended the two into one red road to God.”