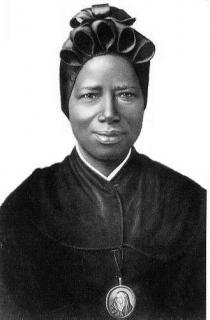 Born in Olgossa in the Darfur region of southern Sudan, Bakhita was kidnapped at the age of seven and sold into slavery. She was re-sold several times. Bakhita’s body was mutilated by those who enslaved her, but they could not touch her inner spirit. In her memoirs written much later, she recalls that dishes of white flour and salt along with a knife were brought in by a women who cut more then sixty patterns in her skin. She then filled them with the flour and salt to ensure Bakhita’s permanent scarring. In 1883 she became the “property” of an Italian consul in Khartoum, Sudan.

Two years later he took Bakhita to Italy and gave her to his friend Augusto Michieli. Bakhita became nanny to Mimmina Michieli, whom she accompanied to Venice’s Institute of the Catechumens, run by the Canossian Sisters. While Miss Mimmina was being instructed, Bakhita, too, felt drawn to the Catholic Church. She was baptized and confirmed in 1890, taking the name Josephine. The future saint refused to return to the Michieli’s home. During the ensuing court case, the judge concluded that since slavery was illegal in Italy, she had actually been free since 1885.

Josephine entered the Institute of St. Magdalene of Canossa in 1893 and made her profession three years later. In 1902, she was transferred to the city of Schio, northeast of Verona, where she assisted her religious community through cooking, sewing, embroidery and welcoming visitors at the door. She soon became well loved by all who had contact with her. Josephine Bakhita acknowledged that Mary, Most Holy, was her advocate. On her death bed her last words were “Our Lady! Our Lady!”

The first steps toward her beatification began in 1959. She was beatified in 1992 and canonized St. Josephine Bakhita on October 1, 2000, the same day as St. Katharine Drexel.