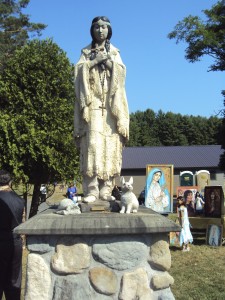 Canonized on October 21, 2012, Saint Kateri continues working miracles, opening the door of faith before so many people around the world.

Kateri was born in 1656 in a village on the Mohawk River called Ossernenon, now Auriesville, NY. Her father was a Mohawk chief and her mother a Christian Algonquin raised among the French. The name Tekakwitha—she was also called Tegarouita or Tegakhouita—means “she who puts things in order” or “she who advances or opens the way before her.”

The Bureau of Catholic Indian Missions led a pilgrimage of over 720 faithful to Rome for the canonization. Click here for photos of the trip!

An exciting new documentary on the canonization will be released in late summer of 2013.