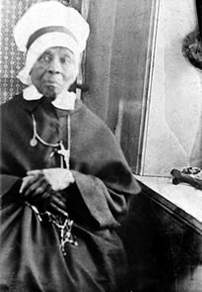 Elizabeth Clarisse Lange (Mother Mary Lange of the Oblate Sisters of Providence) was born circa 1784 and died February 3, 1882.

Mother Mary Lange founded the Oblate Sisters of Providence in 1829. The Oblates were the first United States based religious order of women of color.

The Oblate Sisters were role models who provided an atmosphere of faith and hope to parents and to children degraded by slavery.

Elizabeth Clarisse Lange’s parents were refugees who fled to Cuba from the revolution taking place in their native Saint Domingue. In the early 1800s young Elizabeth left Santiago, Cuba to seek peace and security in the United States. Providence directed her to Baltimore, Maryland, where a great influx of French-speaking Catholic Saint Domingue refugees was settling. Elizabeth Lange came to Baltimore as a courageous, loving, deeply spiritual woman. Although she was a refugee, she was well educated, and of independent means, possessing monies left to her by her father.

It did not take Elizabeth long to recognize that the children of her fellow refugees needed education. She used her own money and home to educate these children of color. For ten years Elizabeth, with a friend, Marie Magdaleine Balas, offered free education.

Thus, on July 2, 1829, Elizabeth and three other women (Rosanne Boegue, Marie Balas and an older student, Almaide Duchemin) took their vows. The first paragraph of the Rule was quite simple:

“The Oblate Sisters of Providence are a religious society of virgins and widows of color. Their end is to consecrate themselves to God in a special manner not only to sanctify themselves and thereby secure the greater glory of God, but also to work for the Christian education of colored Children.”

Elizabeth, founder and first superior of the Oblate Sisters of Providence, took the name of Mary. These women demonstrated leadership and divinely daring in the face of poverty, racism, humiliations and untold hardships. The sisters were role models who provided an atmosphere of faith and hope to parents and to children degraded by slavery. In Mother Lange’s school, Catholics and non-Catholics were accepted.

The multiplicity of works undertaken by the Oblate Sisters despite a shortage of personnel and financial resources gives evidence to the depth of their awareness, devotion, self-denial and desire to serve. The sisters:

By 1860, all of the Catholic schools for “colored” children in Baltimore were taught by Oblate Sisters: St. Frances Academy, St. Joseph’s School for Boys and St. Michael’s. During the 20th century, Oblate schools were founded in 15 states in the United States. The have given witness during periods of social struggle by active participation for almost 200 years of continual service to schools, day care centers, outreach and catechetical programs which encompass all age levels. They provide social and pastoral services to all ethnic groups.

Cardinal Keeler, Archbishop Emeritus of Baltimore, began the canonization process for Mother Lange. At the present time she is referred to as the Servant of God Mother Mary Lange.