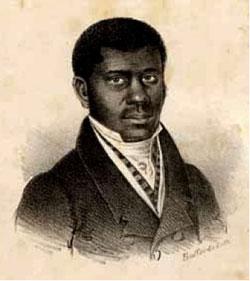 Pierre Toussaint was born into slavery on the French colony of Saint Domingue. His master, Jean Berard, encouraged the young Pierre to learn to read and write. In 1787, Berard moved his new wife and several slaves, including Pierre and his younger sister Rosalie, to New York City.

In view of his lifelong commitment to helping others, Pierre Toussaint is credited as a founder of Catholic charitable works in the United States.

As Pierre established a good reputation among New York’s elite as a hairdresser, an increasing number of Haitian refugees in the American city brought reports of murder and devastation from the island. With the money he had received from the women whose hair he cut, Pierre bought his sister’s freedom. He selflessly decided to remain a slave, however, thinking he could better care for the recently widowed Madame Berard, in that capacity.

Eventually, Madame Berard’s health gave way. Then, on her deathbed she granted Pierre his freedom. At the age of 41, Pierre was a free man. It was as a free man that he married the woman he loved, Juliette Noel, whose freedom he had purchased. Like Pierre Toussaint, Juliette had begun her life in the “New World” as a slave in Haiti. Together, they continued charitable work Pierre had begun informally, helping refugees find jobs and caring for orphans. Next, the couple opened a school to teach black children a trade.

When the plague struck New York, Pierre personally cared for the victims. When Pierre’s sister, Rosalie, died leaving an orphaned young daughter, Euphemia, Pierre and Juliette welcomed her into their home.

In 1851, Pierre—at age 85—suffered the last and greatest sorrow of his life when his beloved Juliette died. He died two years later on June 30, 1853, and was buried in a New York cemetery next to Juliette and Euphemia.

In 1968, the long process to canonize Pierre Toussaint as a saint in the Roman Catholic Church began. In 1990, his body was moved to a crypt under the main altar of St. Patrick’s Cathedral in New York City.

Pierre Toussaint’s Cause for Canonization