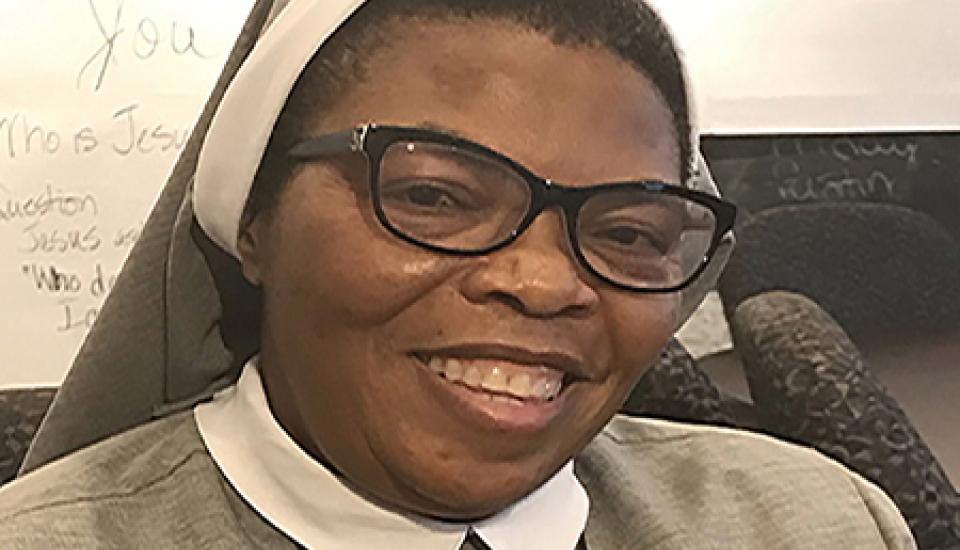 An interview with St. Augustine’s most recent principal (2008-2020), who became the Mission Superior in North America for the Handmaids for the Holy Child Jesus, based in Houston. She now works with more than 50 religious sisters in her order, who are in California, Florida, Nebraska, New York, North Carolina, Texas, and Washington, D.C. This is also her 40th anniversary year of being a religious sister.

How do you feel, having completed a dozen years?

It was rewarding. I feel like I accomplished what I intended to, in a number of ways. Looking back on where I started 12 years ago, we have grown, year by year, strength by strength, each year.

It was a lot of hard work. It’s not about money or ego. With humility and commitment, I was able to accomplish much. Every day, including Sundays after Mass. Twenty-four seven, parents could contact me. I was present and had an open door policy. But I would not have been able to do it without the support of everyone. So many supported and accepted me, even when I made mistakes. I accepted (my mistakes) and learned from (them).

What do you feel you accomplished that is measurable?

Twelve years ago, I can remember crying in my office because our high school admissions (results) were so disappointing. Within three years of my arrival, we were able to turn this around. So, our accomplishments can be measured by our raised academic standards which have resulted in raised student performance. We can also see how many more children we were able to send to selective and competitive high schools. Today, even before the students take the High School Placement Test, high schools are asking us to encouraging our students to consider attending their schools.

But student improvement is also due to the fact that our instructors have willing to grow and improve themselves. Even as teachers we never stop learning. We were all learners! I told my teachers, “You are not the only ones learning, but I am learning as well.” During much of my time as principal I continued to go to school. (Sister Gloria fulfilled the requirements to earn Doctorate in Education at Duquesne University this past Spring).

Students and parents know the standards we have set for them. We have no regrets since we took over the financing and operations of our school from the Center City Consortium (which ended in 2008). Again, I certainly didn’t accomplish this on my own, In addition to the support I got from the faculty, parishioners were also very supportive. Donna Pasteur (alumna, parishioner and retired principal) who has become a very good friend, helped me interview for new teachers. Dena Grant (parishioner and alumna) organized a robust Student Book Club that continued even during the summer. I particularly want to recognize the support I received from the Pastor Fr. Pat (Smith) and members of the School Governance and Strategic Planning Team. With the dedication and hard work of all of our stakeholders, we accomplished the goals we set.

Urban schools, according to school leaders, tend to be more stressful because there are more needs and sometimes fewer resources. How did you survive twelve years of urban education?

How did I survive? I’d like to think I achieved more than survival. From the moment I arrived as principal, my goal was to thrive. First of all, Saint Augustine Catholic School is not your typical “urban school” especially when it comes to available resources. Since I arrived at Saint Augustine Catholic School in 2006 more than a dozen parochial schools in urban centers of the Archdiocese have closed their doors due to lack of resources. But when you are determined enough and are willing to face any situation with faith and resolve, you can break through. One wonderful advantage that I had that so many other schools serving a similar population didn’t was the extraordinary financial support and commitment from the church and alumni of the school. I have never seen anything quite like it. Parishioners of Saint Augustine Church and alumni and other donors who believe in our school have put our school at a huge advantage when it comes to the quality of the teachers we hire and the resources our children need.

But on my part, it does help to know how to navigate the system to get what you want especially when it comes to public resources available to our children. For example, for my students needing and eligible for extra support I was able to negotiate with (District of Columbia Public Schools), to fight for what we needed. The funding is there. But If you don’t ask, you don’t receive. I would speak my mind at the meetings. For instance, when they offered me (a) Title 1 (teacher) once a week, I said that wasn’t enough. I convinced them to offer their services five days a week and secured a full time Title I teacher for those students who needed it. I also used my experience in my doctoral studies that I was especially able to apply to students who were socially-economically challenged and needed the extra support to excel academically. In other words, to thrive!
Because of our high academic standards and improved performance over the years, Saint Augustine also attracts high performing children who enroll in our elementary, middle school and junior high school grade levels. To meet the needs of these high performing and above-grade-level students we train our teachers to practice differentiation in their lesson planning to assure that students at every level are challenged academically. Whenever you have an environment with those who are very high performers and those who are low performers, schools tend to put a lot more effort into the students on the lower level and neglect the others. But in addition to the practice of differentiation we have had the resources to supplement our teaching staff additional instructors that intentionally target our highest performers to assure that they continue to be challenged academically. One notable example is our Honors Math program that has become so popular that students gladly cut their lunch periods short to participate in “Math Madness” competitions. The children love it.

What’s the best part of being a principal?

For me, the best part of the job is to be able to serve; the ability to educate the whole child; the ability to model what you want them to look up to. I want them to walk into the building and not be reluctant to embrace the day spiritually, academically, and morally.
Having the ability to form a team of teachers that understand you and share your vision is so important. I like to tell them, “This is our home, this building. This is where the Lord wants us to be. Whatever you do here, believe that the Lord is asking you to do that. Look at it from that point of view”.

I try to be a very good listener; especially to my staff and teachers. I will listen to you, and hopefully we will come to a consensus. The day they were giving me an enthusiastic send off, what I kept hearing from them was, “We know you are firm but you are also fair. Sometimes we didn’t agree or got upset, but we knew that you meant well for us.”

I would insist that they use the right tools, including weekly lesson plans. Children learn better with proper planning. If you don’t have a lesson plan, it’s like going to a farm without a tool to cut or mow. You can’t go there without having the right material or instruments as well as the right creativity to avoid being a slave to the textbooks.

Has the quality of the parents grown?

The number of engaged and committed has increased. Ten years ago, there were would be five or 10 parents at the Home School Association meeting, and we had to beg them to be involved. Now you have parents who want to help. I get emails over the summer, “Is there anything we can do to help?” For me, that is very satisfying. Anytime we are celebrating teacher appreciation day, the parents take off work to help. I pray that they may continue to support the new principal.

Has the Catholic identity of the school grown?

We don’t compromise on Catholic identity. How many schools have a nun as a Director of Religious Education (DRE)? How many have a DRE? She prepares our children for Baptism, First Holy Communion, and Confirmation. Not many can beat St. Augustine at that. Our pastor celebrates Mass every week with great enthusiasm and homilies that really engaged the children. His presence in the school is such a blessing that I think makes a powerful impression on the students.

Yes it has. In 2010 we welcomed 19 students into the Catholic Faith when they were all baptized at the Easter Vigil that year. Since that time, nearly 60 other students have become Catholic. Obviously we take our call to evangelize our students very seriously but no one is ever pressured or forced to accept Catholicism and those that do, do so with their parent’s full consent. My prayer is that we will enroll more Catholic children in our school but all children are welcomed and accepted regardless of their religious affiliation or even if no affiliation.

I think that in my time at Saint Augustine School I have worked harder than any school where I have served. I gave it my all. And I am so grateful to God for the opportunity to do so!