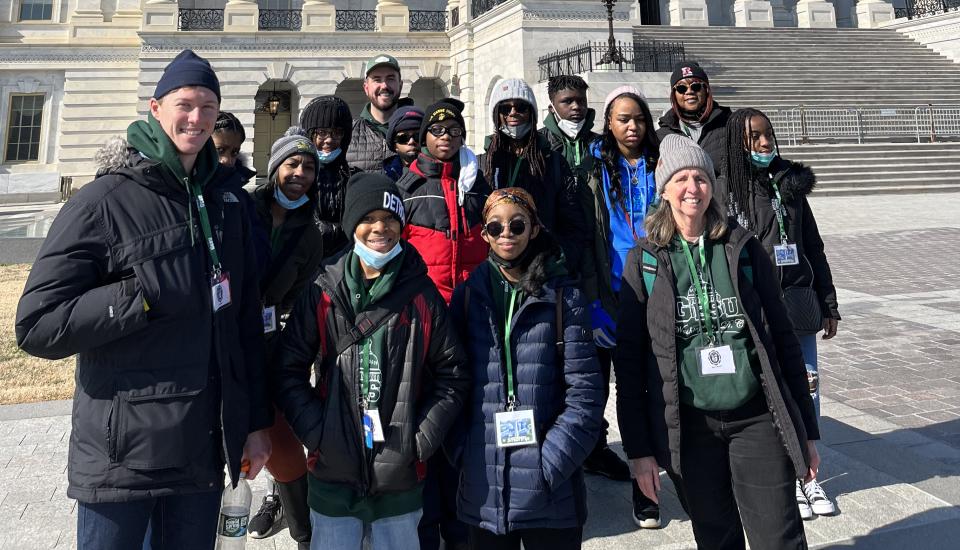 After two long years of waiting Gesu has once again been able to embark on its annual 8th grade field trip to Washington D.C. On Monday February 14th, fatigued and yet excited 8th grade students and staff met before sunrise at Wayne County airport to catch their early morning flight to Washington. For some students this was their first experience flying, though you wouldn’t be able to tell by the way they conducted themselves. Student’s were orderly, calm and focused as they made their way through security and then towards the gate. By 9am the Gesu DC crew had landed in Dulles airport and were greeted by a cold and sunny Washingtonian day. The group moved quickly, dropping bags off at the hotel on Connecticut St., and then went off to the National American History Museum. Once there, students were given free range to explore the many exhibits, highlighting locomotives, the star spangled banner, and democracy hall to name a few. By the time the group stepped out, the Washingtonian winds had picked up, challenging the group of cold weathered Detroiters. Walking through the Mall, from the Washington, Lincoln, Jefferson, and Martin Luther King monuments and memorials, it soon became clear that what students (and staff) wanted to experience the most was the warmth of inside heat. After a quick stop by the White House, the group ended their first day with a metro ride back to the hotel, capping off a day in which the group traveled an untold number of miles via plane, bus, train, and feet.

The next day students and staff were up and ready for another packed day, this time starting at the Basilica of the National Shrine of the Immaculate Conception. After a brief tour and some time for reflective prayer, the group made a stop at Union Station for lunch before walking to the Supreme Court. After some photos and failed tiktok attempts, the group made its way to the steps of the Capitol building and then into the National Gallery of Art. Finally, the group ended the day at the National Archives where they were guided by the very affable and informative Archive guards.

Wednesday was the group’s last day in D.C., and they made the most of it. Gesu was given the honor of laying a wreath at the Tomb of the Unknown Soldier, so early Wednesday morning students and staff trekked through the beautiful rolling hills of the Arlington Cemetery towards the sacred site. The ceremony was a solemn and proud experience for all who were present as the four students chosen to represent Gesu followed behind the methodical steps of the graceful guard. From here the crew subway surfed their way back up to the mall to visit the African American History Museum. Two hours later everyone was piled up on a bus and ready to go to the airport. Though a lot was seen and done, it seems that the greatest takeaways for Gesu’s 8th grade students and staff were the shared memories of laughing, learning, and exploring together. 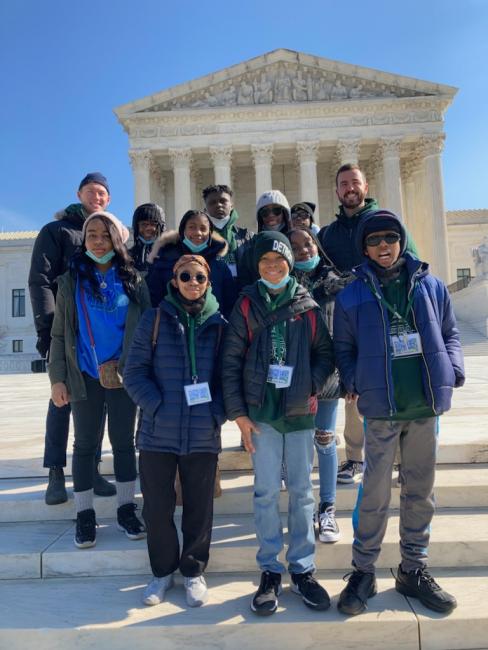