We Came A Long Way By Faith 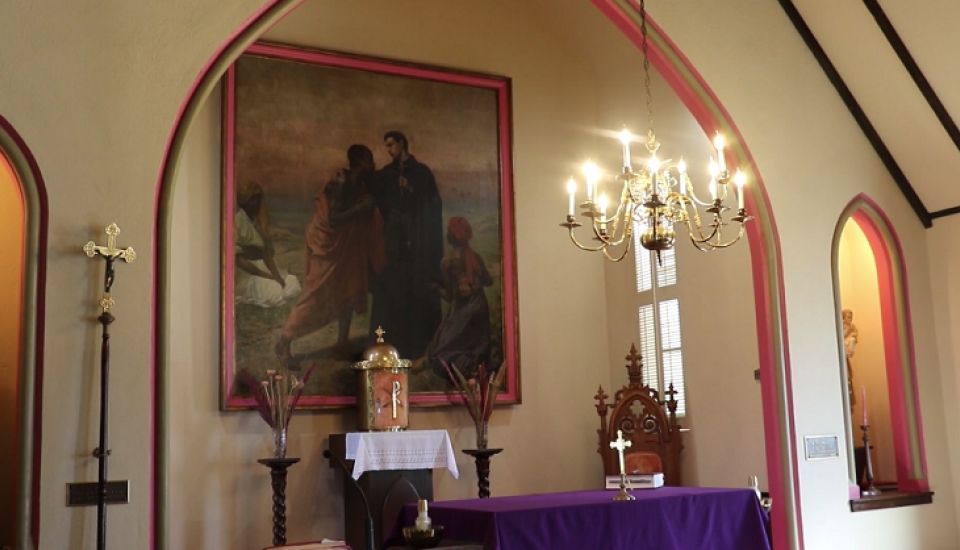 Walterboro, S.C. – A new documentary by South Carolina filmmaker George “Buddy” Wingard Jr. focuses on a Lowcountry community of Black Catholics and the Antebellum-era church at the center of that community.

This film – We Came A Long Way By Faith: Catholic Hill and St. James the Greater Catholic Church – focuses on early Catholicism in South Carolina, slavery, the history of St. James the Greater and its importance to the Catholic Hill Community. The film was completed in early 2020, in time to celebrate the 200th anniversary of the Charleston Diocese. Because of the COVID-19 pandemic, a public screening is not currently possible; however, the film is available for public viewing online at https://vimeo.com/415619367.

We Came A Long Way By Faith: Catholic Hill and St. James the Greater Catholic Church from George Wingard on Vimeo.

Catholic Hill, formerly known as Thompson’s Crossroads, is an area steeped in history. The predominant feature on the landscape is the 1935 Gothic Revival-inspired St. James the Greater Catholic Church and its recently renovated 1901 schoolhouse.

The first church on the spot was dedicated in 1832 and burned in 1856. Very little is known from that point until the 1890s when it was learned that a group of former slaves and their descendants, with a vibrant and thriving faith, was worshipping in the area. Soon a new church and school was built. While mass was celebrated by itinerant priests twice a month at the church, the leadership flourished under the dedicated men and women of the church striving to preserve and strengthen the faith of the community on an everyday basis. The present church, built in 1935, is home to a new generation of followers maintaining their strong Catholic Faith. Today’s congregation works tirelessly to preserve both the memory of those who came before them and safeguard the legacy for many generations to come.

In 2018, Award-wining documentary filmmaker George “Buddy” Wingard Jr. was first introduced to the story of St. James Catholic Church and the Catholic Hill community in Colleton County, S.C., and immediately the idea for a film was formed. After speaking with the congregation – where he asked “do you have a problem with a white Methodist telling your black Catholic Story?” – he began formulating the outline, traveling to the community to conduct interviews, and finally, editing nearly 18 hours of footage into a 51-minute film released online in July 2020.

Wingard serves as program coordinator for the Savannah River Archaeological Research Program (SRARP), a division of the South Carolina Institute of Archaeology and Anthropology (SCIAA). SCIAA is a department of the University of South Carolina that is located on the grounds of the Savannah River Site (SRS), a U.S. Department of Energy (DOE) facility that encompasses portions of Aiken, Barnwell and Allendale counties.

The documentary is just the latest by Wingard to explore the experiences of black South Carolinians in the Lowcountry and in the Central Savannah River Area (CSRA) in the 19th through mid-20th Century. In 2013, he co-produced the documentary “Discovering Dave: Spirit Captured in Clay,” focusing on an enslaved Edgefield, S.C., stoneware potter. His next two films, “Reconstructing Hawthorne” (2016) and “Mart to Art: A Repurposed Life” (2017), focused on aspects of the building of the SRS campus and the impact on the area’s residents.

His 2018 film, “The Burnt Church: An Exploration of Pon Pon Chapel of Ease,” discusses the mid- 18th Century ruins of an Anglican Church located in Colleton County, S.C. Pon Pon’s history, preservation and community support of the structure is discussed. In 2019, Wingard produced

the short film “One More Time: Walking the Streets of Dunbarton.” This film follows members of two families as they return to the small community of Dunbarton, S.C., which was displaced in 1950 by the construction of the SRS campus.

All of Wingard’s films have been screened at various film festivals across the nation and internationally and have taken home top honors. Among his accolades, he has been honored as “Best Professional Filmmaker” at the 2017 Ogeechee International History Film Festival and “Best South Carolina Filmmaker” at the 2018 South Carolina Underground Film Festival. Each of Wingard’s films may be viewed on the Savannah River Archaeological Program (SRARP) website

– www.SRARP.org – under the videos link.